In this series we focused on those who met Jesus on his journey from the stable to the cross.  Now we explore those who saw Jesus after His resurrection

The children began by hearing many statements.  Some were true, some were not  The children were asked to answer with cards that said “I believe it” or “I doubt it”.    What do you doubt? Do you remember which is true

Play this game with your friends and family.  Use things about yourself, are there things they might doubt?

We all doubt and question things sometimes.  Thomas was the one discipline who would not believe Jesus was alive until he could see for himself.  Listen to his story 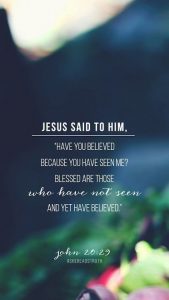 When Jesus said this he was talking about us  All of us, everyone who believes even though we have not seen..